What is TPP? How does it Effect YOU?

“Education is the most powerful weapon which you can use
to change the world.” ― Nelson Mandela

TPP stands for Trans-Pacific Partnership.
From Eff.org "The Trans-Pacific Partnership (TPP) is a secretive, multi-national trade agreement that threatens to extend restrictive intellectual property (IP) laws across the globe and rewrite international rules on its enforcement. The main problems are two-fold:
(1) IP chapter: Leaked draft texts of the agreement show that the IP chapter would have extensive negative ramifications for users’ freedom of speech, right to privacy and due process, and hinder peoples' abilities to innovate.
(2) Lack of transparency: The entire process has shut out multi-stakeholder participation and is shrouded in secrecy." 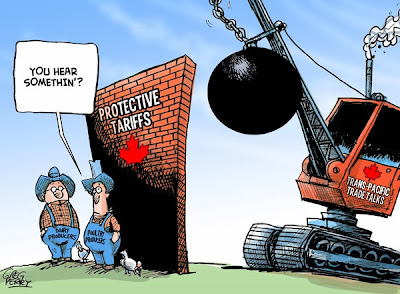 My thoughts: Any Multi-Nation "deal" that might take away more of our rights as Free American People is a bad idea.  The US is riding the razors-edge at the moment but it could tip in either direction.  Civil Wars have been fought over less.

Here's what I mean... from Expose the TPP,

The TPP would require us to import meat and poultry that do not meet U.S. food safety standards.


The TPP would require us to allow food imports if the exporting country claims that their safety regime is "equivalent" to our own, even if it violates the key principles of our food safety laws. These rules would effectively outsource domestic food inspection to other countries.


Under TPP, any U.S. food safety rule on pesticides, labeling or additives that is higher than international standards would be subject to challenge as "illegal trade barriers." The U.S. would be required to eliminate these rules and allow in the unsafe food, or we would face trade sanctions.


The U.S. Food and Drug Administration already inspects less than 1% of all seafood imports for health hazards. Entering into the TPP with Malaysia and Vietnam, both TPP negotiating parties and major seafood exporters, would increase seafood imports and further overwhelm inspectors' limited ability to ensure the safety of our food. Some TPP countries have serious shrimp and fish safety issues. For example, even with the minimal inspections, high levels of contaminants have been found in Vietnam's seafood.


Under the TPP, food labels could also be challenged as "trade barriers." The TPP would impose limits on labels providing information on where a food product comes from. The TPP also would endanger labels identifying genetically modified foods and labels identifying how food was produced. TPP would expand the limits on consumer labels already included in existing "trade" agreements, like the World Trade Organization (WTO). But already under the WTO, the U.S. dolphin-safe tuna fish label and our country-of-origin meat and poultry labels have been successfully attacked by other countries. And, under TPP, a foreign meat processing or food corporation operating within the United States could directly challenge our policies that they claim undermine their expected future profits - meaning a barrage of new attacks.


Maybe you have seen the "March Against Monsanto" signs, petitions and events that happen around the world in May and October every year.  Maybe you've thought "well this doesn't effect me so I won't worry about it."
Well, it effects YOU.  It effects ME.  It effects OUR FAMILIES!

The TPP takes away rights that are protected under the Constitution.  THE SAME CONSTITUTION THAT OUR BRAVE MEN AND WOMEN FIGHT AND DIE FOR.

I urge you to learn more about the TPP and SHARE.  If you're a blogger PLEASE share the info on your own blog and invite others to learn and share.
“I am not a teacher, but an awakener.” ― Robert Frost 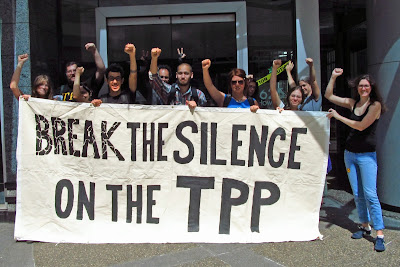 This is really an important issue Joyce and I was not aware of this until very recently. Thanks for helping to get the word out and sharing your thoughts.

Great post, very informative and more of us need to know! Thanks for sharing with us over at the Homeacre Hop! Please join us again soon! We'll be taking next week off for Christmas. Merry Christmas!
Mary :)
www.homegrownonthehill.blogspot.com

Thanks for waking us up. I'm very aware of the March Against Monsanto, but was sadly in the dark about the TPP.