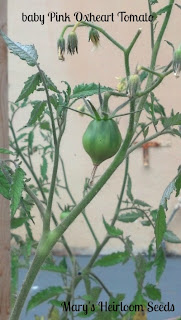 Currently our specials include

All of these heirloom varieties are $3 or LESS per pack!

Mung Beans and Hard Red Wheat are the NEW seed specials!
From now through April 15, all orders of 8 ounces or more will include an EXTRA 2 ounces! 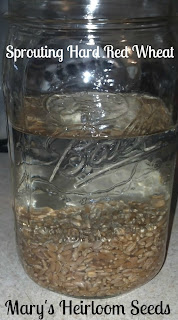 Mung Beans are one of the easiest to sprout and Red Wheat is ready in a little as 2 days.  Mung Beans are ready in as few as 3 days and as long as 6.  I will be posting tutorials in the next few days.  Check back for more info AND recipes!

In case you missed the announcement, there are more NEW ARRIVALS at Mary's Heirloom Seed.  Stop by and check em out!
Posted by Mary Smith at 6:06 PM No comments:

There is so much going on these days!  Check out our NEW Arrivals at Mary's Heirloom Seeds.  There are also a few varieties on sale through April 15th.  Details
Don't miss out on the Giveaway going on RIGHT NOW at
Homegrown and Healthy!  While you're there, check out all of her tips and recipes.  LOTS to read!
I'll be announcing another giveaway from Mary's Basics Vegan Lip Balm VERY soon.  AND I've re-vamped out seed balls into FLOWERS!
Coming soon! Check out my cool new button!

PLUS, I'll be guest posting here and there in April. WOOHOO!

Have a wonderful weekend!!!

Email ThisBlogThis!Share to TwitterShare to FacebookShare to Pinterest
Labels: giveaway

You read that right...MORE New Arrivals over at Mary's Heirloom Seeds!
Below is a copy of our most recent newsletter. To get added to the list you can send an email to mari_backtonature@yahoo.com


HAPPY FRIDAY!
You'll find me at these great parties.
Posted by Mary Smith at 7:28 AM 1 comment:

I am so excited to share another blog that I've been stalking following.  Today we have Jenny from Black Fox Homestead sharing her journey to full-time homesteading.

My husband is of Italian descent, with family still living in Italy and working on a farm that has been theirs for several generations. As a child and later as a young adult he visited for the summer. He was so moved by his experience that he cried when he left. When he got older, he said, he wanted to farm.

My grandmother grew up on a farm and later married my grandfather who was a farm hand. She learned to forage for dandelion greens which she canned, and made the most amazing pies. When I received a bundle of cash for a high school graduation present, I wanted to go visit her and spend afternoons picking cherries in a Michigan orchard. That was my idea of a good time.

If one had known our roots one might have thought that we were bound for farming from the start. But we weren’t. We began our married life like most other couples our age: in a nice subdivision. Neither of us knew very much first hand about gardening, but one year I decided to give one a try.

Having read Square Foot Gardening from cover to cover I planted my first tiny, 4’x4’ vegetable garden. I really didn’t know what I was doing, I put all the wrong things in at all the wrong times, but a few small crops managed to grow: enough that I was hooked on growing food for my table.

My love of growing things led to my pursuit of a Master Gardener certification and it was through a dedicated and gifted extension agent that I learned about heirlooms. I remember the day she gave the lecture, explaining how these seeds had been handed down from generation to generation, and how, once planted, allowed to grow, and produce seed, we could continue the cycle. The thought gave me goosebumps. That summer I planted my first Cherokee Purple tomato.

It was about that time that my husband and I encountered some health issues that made us stop and think about what was in our food. We began to gradually make changes to our diet, eliminating as much processed food as we could and eating as much organic produce as we could find. I began baking my own bread, we located a local dairy that sold raw milk and cream. I began making my own butter. We worked to grow as much of our own produce as we could.

Our garden began to expand and take over our back yard, and we began to wonder aloud about a farm. It was never really a serious dream, it wasn’t one we thought was attainable, but every so often, we’d sit on our back porch overlooking the lettuces and beets and talk about how cool it would be if we could raise all of our own food.

Then, one afternoon we realized that the tone of our neighborhood had changed and not for good. It was time for us to make a change. The dream of a farm surfaced again. After much scratching of figures, adjusting, refiguring, and more scratching we realized that we could make it a possibility. We located a lovely spot some forty miles east of where we lived, a gently sloping acreage with a large pond. We built a small red pole barn and fitted it out as a home.

Last October, we moved in.

Our garden, the barn, and our home
The transition from city life to living in the country has not been without its challenges. We’ve learned the hard way that growing food on a large exposed plain is quite different from the protected miroclimate of a back yard. We’ve learned to live with the mud, and we’ve learned to adapt to living 15 miles from a well stocked grocery; but we’ve never regretted our decision or wished for a second that we were back in the city.

This past February my husband decided to take an extended leave of absence from his computer consulting job with plans to work together to see if we can make a go of full time market growing.

We currently have eleven 5’x50’ garden beds which hold a variety of cool season heirlooms: lettuces, Swiss chard, spinach, kale, and beets. They will soon be joined by eight different varieties of tomatoes, summer squash, peppers, and beans as well as a fava bean green manure crop to help enrich the soil for future planting.

In June we are scheduled to receive eight tiny Rhode Island Red chicks, the first of our livestock. Future plans include dairy goats and there has been talk of pigs, ducks, geese, meat birds, and perhaps a dairy cow.  The eleven garden beds will increase to twenty-two.

My favorite time of day on our little farm is sunset. There is something spectacular about ending a days’ work and looking out over our land, seeing the vast expanse of sky above painted with a beatifully setting sun. No two are alike, every evening the show is completely different, offering something new.

Tired of city life and the stress of an eighty hour work week, Jenny and her husband decided to trade in their computer consulting business for life on a homestead as full time market growers. In the fall of 2012, they moved to a small acreage in rural Northeastern Oklahoma where they are learning to live off the land. On her blog at www.blackfoxhomestead.com , Jenny writes about their transition from city to country life, learning how to can and preserve food, and their experiences with gardening naturally. Visit her growing Etsy site featuring country curtain patterns, gardening books, and other vintage treasures. Connect with her on Facebook, Pinterest, and follow her on Twitter @foxhomestead .

In the Garden Spotlight: CARROTS

The Danver's Half- Long Carrot has thick 7-inch roots and good flavor.  It is an improved strain of Danvers carrot that was introduced in 1947.

The Atomic Red Carrot produces Brilliant red carrots.  They are so healthy and unique-looking, sure to add color to your garden. The 8-inch roots are high in lycopene, which has been shown in studies to help prevent several types of cancer.  Crisp roots are at their best when cooked, and this helps to make the lycopene more useable.


Growing Carrots is very easy.  I would suggest that you consider companion planting in advance.  Carrot flies and maggots can be a big issue.  Planting Onions and Leeks will help keep those nasty pest away.

From the Growing from Seed Page:
One week before planting you can add a general fertilizer, one that does not contain high levels of nitrogen, as this could cause the seeds to grow multiple roots. In most cases, plenty of compost or peat moss is enough for carrots to grow well.

If you have additional questions on growing carrots just ask.  Check out Mary's Heirloom Seeds if you have a moment.  The Save some "Green" on Greens sale ends tonight at midnight.

Sharing at Wildcrafting Wednesday.
Join me as I party HERE.
Posted by Mary Smith at 9:29 AM 7 comments:

Email ThisBlogThis!Share to TwitterShare to FacebookShare to Pinterest
Labels: In The Garden Spotlight

Remember when I announced that I'd be reviewing an AMAZING book and I invited you to join me?

Our reviews are coming to you sooner than I thought!  Nancy over at Prudent Living had already read the book and asked to share her review early.

Stop by Prudent Living and say "Hey!" from Mary @ Back to the Basics!  I'm still working through the book at the moment.

It's not that it's difficult to get through but with Spring here the Heirloom Seeds are flying off the "shelves" these days.  Add in the Seed Bombs and we've been pretty busy.  If you didn't get to check out the seed bombs don't worry, they are still available.

Thanks for stopping by!  See you tomorrow for another amazing guest post!
Posted by Mary Smith at 8:18 AM 2 comments:

Do I have you scratching your head thinking "What's a Seed Bomb?" and "Why do I care?" 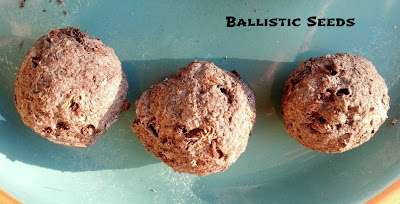 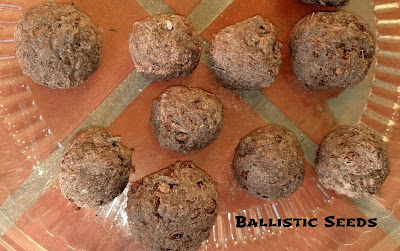 We use organic seeds in all of our seed balls.

All of the ingredients used to make the seed bombs are natural.  Does it get any better than that?  Probably not!

Seed Balls are available in packs of 6 or 12.  Varieties include:
Marigold, Snapdragon, Zinnia and Morning Glory.
Just added: Cilantro!
There will be a few more varieties by the end of the week.

These flower garden kits are sure to attract novice and expert gardeners alike - and flying creatures too! Whether planted in the yard, in containers, or in an outdoor window box, these seed collections will create a vibrant spectacle that would make any gardener proud and flying creatures happy.

Contents made in the USA. Handmade "seed bombs" ship in approximately 3 business days.