An entire generation of war children...Let that sink in!

You might be asking yourself, "What does a Victory Garden have to do with war?"  Everything! 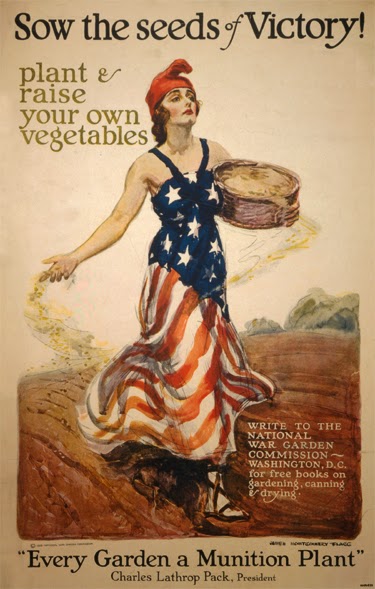 Victory Gardens, also called War Gardens, were a product of WW1 and WW2.  From wikipedia, "They were used along with food stamps to reduce pressure on the public food supply. Around one-third of the vegetables produced by the United States came from victory gardens.[2] Besides indirectly aiding the war effort, these gardens were also considered a civil "morale booster" in that gardeners could feel empowered by their contribution of labor and rewarded by the produce grown. This made victory gardens a part of daily life on the home front.

What happened to the Grow Your Own movement?  With the influx of grocery store chains, fast foods and pre-packaged junk food society has become almost completely dependent on the corporate supply of "easy" foods.  The attitude of "why grow it when I can buy it" is obvious when you look at obesity, cancer and disease rates in this country.

Add to that the corporate takeover of family farms with their billions of gallons of toxic, cancer-causing pesticides and you have a recipe for disasterous reprocusions and potential for human extinction.  A bit dramatic?  Not when you think about how fast humans are killing bees. Is it possible that corporate-funded lobbyists and law-makers want citizens to be dependent on their junk-food and "easy" food?  What would they gain?  MONEY!  If an informed population decided to stop spending their hard-earned cash on crap and made a lifestyle change it would revolutionize the Organic Growing movement.  We might see a HUGE shift in cases of diabetes, cancer and other diseases.  Can you imagine a healthier, happier society?


Want to learn more?  Check out
Dept of Defense: You're an "Extremist" if you Grow Food
Does Monsanto Control our Food in the US?
What are GMOs ... Just the Facts

Now more than ever it is important for each individual to realize the importance of locally grown, homegrown foods.  Growing your very own organic garden is healthier for your body and healthier for the planet.

If you've never grown a garden but are interested in getting started please contact me.  I have many resources to get you started on your very own Victory Garden.
Send an email to mary@marysheirloomseeds.com

Hi wanted to stop by to say how much I love this post, great for the fall posts and would love if you share it on Fabulous Friday Party
Thanks Maria

Hi Mary,
I am so glad that you "told it like it is" about the current disastrous state of our corporate controlled food and agricultural industries. It is shame! I agree that we must get back to growing our own organic food and controlling what we eat--it is a matter of life and health! Even those of us who live in apartments can grow small indoor gardens, sprout seeds, join CSA's or shop at our local farmer's markets. Thank you for sharing this important post on the Healthy, Happy, Green and Natural Party Blog Hop. We need hear this!