Pumpkins are a warm-season vegetable that can be grown throughout much of the United States. They require a fairly long period (3 - 4 months) of hot weather and can not tolerate any frost. Besides being used as Halloween jack-o'-lanterns, pumpkins are used to make pumpkin pies, soup, bread, butter, custard, and even cookies. 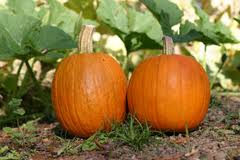 What do you need?
3 to 4 months of sunny weather, with day time temperatures of at least 70 F, preferably hotter.
A very sunny location.  The won't grow under trees and in the shade.
Rich soil, that doesn't sit under water.  Pumpkins like lots of organic matter: manure, grass clippings, leaves, compost should be worked into the soil ahead of planting.
Water!  They do need to be watered, a good soaking, at least once a week.

When to Plant
Pumpkin is a very tender vegetable. The seeds will germinate in cold soil, and the seedlings are injured by frost. Do not plant until all danger of frost has passed, and the soil has thoroughly warmed. Basically, plant seeds late April through July in the deep South; and from late May to mid June in the north.

Spacing and Depth
Pumpkins grow as a vine, which means they take up a LOT of space. Pumpkins require a minimum of 50 to 100 square feet per "hill". Plant four or five seeds per spaced an inch or two apart in one hole (called a "hill"). Leave 5 to 6 feet between each hill. When the young plants are well-established, thin each hill to the best two or three plants.

There are newer "semi-bush" varieties that do not vine quite so much (of course the yield is also smaller). Plant semi-bush varieties one inch deep (four or five seeds per hill) and thin to the best two plants per hill. Allow 4 feet between hills and 8 feet between rows.
Plant miniature varieties one inch deep, with two or three seeds every 2 feet in the row. Rows should be 6 to 8 feet apart, with seedlings thinned to the best plant every 2 feet when they have their first true leaves.

Plant bush varieties one inch deep (1 or 2 seeds per foot of row) and thin to a single plant every 3 feet. Allow 4 to 6 feet between rows.

Bees, that are necessary for pollinating squash and pumpkins, may be killed by insecticides. Organic gardening and pest control methods should be employed (of course!).

Harvesting
Pumpkins can be harvested whenever they are a deep, solid color (orange for most varieties) and the rind is hard. If vines remain healthy, harvest in late September or early October, before heavy frosts. If vines die prematurely from disease or other causes, harvest the mature fruit and store them in a moderately warm, dry place until Halloween. Cut pumpkins from the vines carefully, using pruning shears or a sharp knife and leave 3 to 4 inches of stem attached. Snapping the stems from the vines results in many broken or missing "handles." Pumpkins without stems usually do not keep well. Wear gloves when harvesting fruit because many varieties have sharp prickles on their stems.

Avoid cutting and bruising the pumpkins when handling them. Fruits that are not fully mature or that have been injured or subjected to heavy frost do not keep. Store in a dry building where the temperature is between 50 and 55°F.

Common Problems
Powdery mildew causes a white, powdery mold growth on the upper surfaces of the leaves. The growth can kill the leaves prematurely and interfere with proper ripening.
Cucumber beetles and squash bugs attack seedlings, vines and both immature and mature fruits. Be alert for an infestation of cucumber beetles and squash bugs, as populations build in late summer, because these insects can damage the mature fruits, marring their appearance and making them less likely to keep properly.
Posted by Mary Smith at 9:39 AM

Thank you so much for including this on my blog hop - this post is so informative & helpful!!
Angie
godsgrowinggarden.com