It's that time of year again.  It's SPRING and we're working in the garden.  We've had quite a few requests for organic pest control methods so we're about to share our Organic Pest Control series once again.  First, let's identify common garden pests 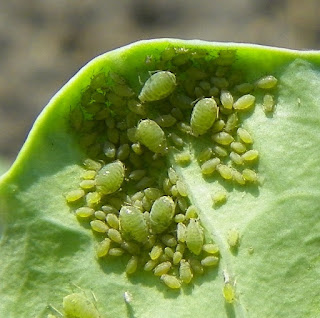 From Garden.org
Aphids are found throughout the United States. These small, soft-bodied insects may be pale green, pink, black, or yellow, depending on the species. Some stages of the life cycle are winged, others wingless. Aphids feed on a wide variety of plants, including most edible and ornamental plants. Clustering on tips of new growth and leaf undersides, they suck plant juices causing leaves to become distorted and yellow.
Aphids secrete a sugary fluid called honeydew that attracts ants and may cause the growth of a sooty black fungus on leaves. In small numbers aphids do little damage, but they reproduce rapidly. They can also spread diseases among plants.
COMPANION PLANTS to deter APHIDS:
Garlic, onions, Mint, coriander, dill, oregano, Rue, Sunflowers and nasturtiums 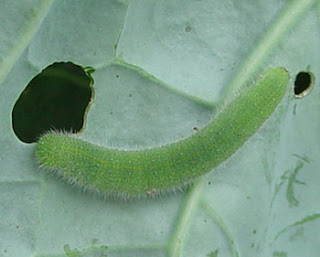 From Garden.org
Found throughout the U.S., the cabbageworm is the larva of a common white butterfly with three to four black spots on its wings. The damage done by these caterpillars is similar to that of the cabbage looper -- the pests chew large, ragged holes in the leaves of cabbages, broccoli, Brussels sprouts, and cauliflower, and may bore into the heads, leaving trails of dark green frass (droppings). There are several generations per year.
COMPANION PLANTS to deter CABBAGE WORMS:
Plant tomatoes, onions, garlic, and sage around cabbage to deter the worm 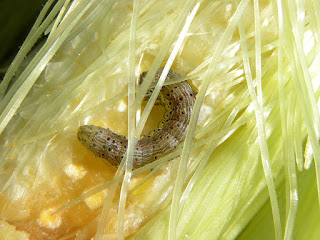 From Garden.org
This pest is common throughout North America. The adult is an inch-long tan moth that lays yellow eggs on leaf undersides in the spring. The caterpillar larva has alternating light and dark stripes that may be green, pink, or brown. This first generation of caterpillars feeds on the leaves. Eggs of later generations are laid on corn silk; the emerging caterpillars feed on the silk and the kernels at the tip of the ear just inside the husk. In some cases this same caterpillar feeds on a variety of plants and hence has many common names: tomato fruitworm, cotton bollworm, geranium budworm. It also is know to feed on beans, peas, peppers, potatoes, and squash. 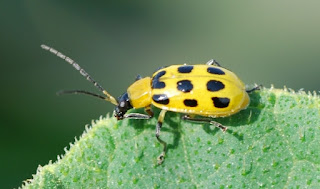 There are two forms of cucumber beetle -- one striped and the other sporting a dozen black spots. 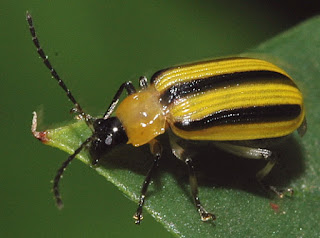 Cucumber beetles are pests of far more plants than their name indicates. In addition to cucumbers and their relatives (squashes, gourds, and melons), these beetles are known to feed on beans, peas, corn and blossoms of several wild and cultivated plants. The spotted cucumber beetle feeds on an even wider array of cultivated plants, adding potatoes, beets, tomatoes, eggplants, and cabbage to its menu. The larva of the spotted cucumber beetle is also known as the southern corn rootworm. In addition to corn roots, it infests peanuts, small grains and many wild grasses. You may find them feasting on your roses and dahlias, as well.
Cucumber beetles are more dangerous to their cucumber-family hosts than many pests, because they transmit deadly diseases -- mosaic and bacterial wilts.
The adults overwinter in weeds and plant debris. They emerge in spring after the last frost and enter gardens once the growing season is underway. You may first notice them inside squash flowers. They lay orange eggs at the base of host plants; white larva with legs and brown heads emerge to chew on roots. Short northern seasons allow just one generation a year, but in the South and milder parts of the West, two or more generations are typical.
COMPANION PLANTS to deter CUCUMBER BEETLE:
Sow two or three radish seeds in cucumber or squash hills to repel cucumber beetles and squash bugs. Nasturtiums are edible annual flowers that are easy to grow and make good companions for cucumber and squash 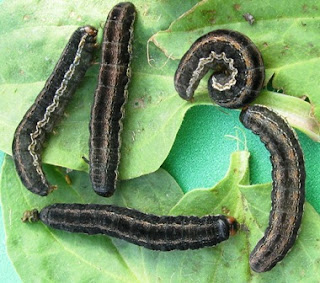 Several kinds of surface-feeding caterpillars are known as cutworms. Their name reflects their feeding habit, which is to chew plant stalks until they are cut through. They feed on many garden plants, and are especially fond of seedlings. Cutworms emerge at night, curling themselves around plant stalks to feed. Cutworms hide during the day, usually an inch or so below ground and near the scene of the crime.
There are three types of cutworms, each characterized the site of feeding: on plant roots; on seedlings at ground level; on buds above ground level. Adult cutworms are dark-colored, night-flying moths. 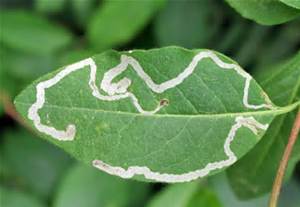 Though many different insects are known as leafminers the most common are the larvae of tiny black flies. They tunnel between the upper and lower layers of leaf tissue creating visible random trails, or mines, in the process.
Adult flies lay eggs on the undersides of leaves. After hatching, larvae tunnel into leaves to feed, gaining some protection from predators there. They are pests to beets, chard, lettuce, peppers, potatoes, and spinach. 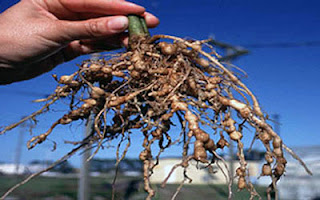 Various species of these microscopic worms are found all over North America, but they are a more severe problem in the South. They feed on the roots of a wide variety of plants, including tomatoes, celery, beans, and spinach. Infected plants are stunted and yellow, may wilt in hot, dry weather, and can die if badly infested. Other symptoms include roots with many small, round nodules on them, and taproots that develop many small side roots such as in the image at left. Nematodes are spread via infected soil, water, tools, and plants. Damage is similar to that caused by other stresses that injure roots; have your soil tested for nematodes to verify that they are the culprit. 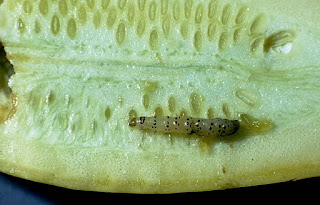 From Garden.org
This caterpillar is mainly a problem in the southeastern United States. It feeds on the blossoms, stems, and developing fruits of summer squash, and occasionally cucumbers and muskmelons. The adult moths emerge in spring after overwintering as pupae in semitropical areas such as southern Florida. They migrate northward to lay eggs on leaves, buds, stems, and fruits of susceptible plants. There may be four or more generations per year depending on the climate. 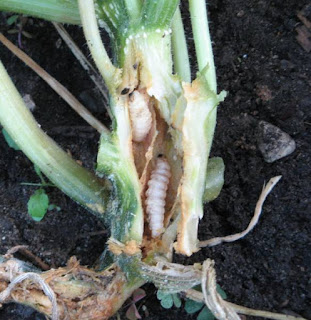 From Garden.org
Squash vine borers are pests of crops east of the Rockies. The adult is a moth that lays its eggs on the stems near the base of the plant in late spring to early summer. Fat, white caterpillars with brown heads hatch out and tunnel into the stems to feed, causing sudden wilting of all or part of a squash vine. If you cut open the stem of the wilted vine lengthwise, you'll find it filled with sawdustlike frass (droppings) and one or more caterpillars. The borer prefers squashes but will occasionally infest cucumbers and melons as well. In the Deep South there can be two generations per year; in the North, only one.
COMPANION PLANTS to deter SQUASH BORER:
Sow two or three radish seeds in cucumber or squash hills to repel cucumber beetles and squash bugs. Nasturtiums are edible annual flowers that are easy to grow and make good companions for cucumber and squash

THRIPS
(too small to see)
Below is damage done by Thrips 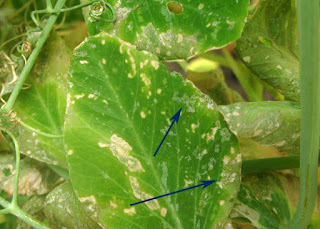 Unless you have a magnifying glass, you probably won't see these tiny pests on your plants, but you may notice signs of their presence, including black, shiny speckles (droppings), silvery stippling (masses of tiny discolored scars on plant parts), or, in severe cases, deformed growth.
Magnification shows thrips to be shiny, elongated blackish or yellowish insects. Adults have feathery, fringed wings, and nymphs lack wings. There are many generations per year. Thrips prefer to feed on new, rapidly growing plant tissue where it is easy to hide. Most feeding by thrips causes only slight damage, but high populations can be quite destructive. Feeding thrips can prevent rose buds from opening, and results in deformed petals. Certain species spread viruses to tomatoes and impatiens. Thrips also attack asparagus, cabbage, lettuce, onions, peas, flowers, and fruit and shade trees.

TOMATO HORNWORM
(My arch nemesis before I learned about planting BORAGE) 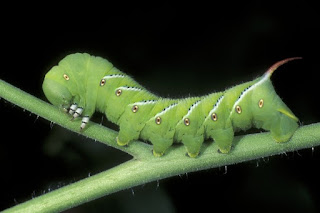 From Garden.org
Tomato hornworms can grow as large as 5 inches long.
Found throughout the United States, these large, fat caterpillars feed voraciously on the leaves and fruits of tomatoes, peppers, eggplants, and potatoes. Adults are rather spectacular sphinx moths: grayish-brown with orange spots on the body and a 4- to 5-inch wing span. After overwintering in the soil in 2-inch brown spindle-shaped pupal cases, moths emerge in late spring to early summer to lay greenish-yellow eggs on the undersides of leaves. Caterpillars feed for about a month, then enter the soil to pupate. There is one generation per year in the North; two or more in the South. 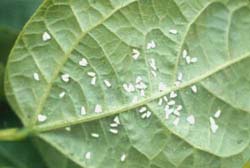 From Garden.org
This pest is found throughout the United States. The tiny insects feed in large numbers by sucking plant juices from the leaves and stems of many plants, including tomatoes, cucumbers, lettuce, flowers, trees, and shrubs.
Whiteflies secrete a sticky, sugary substance called honeydew that may cause the growth of a sooty black fungus on leaves. Eggs laid on leaf undersides hatch into tiny larvae that look like flat, oval, semitransparent scales. The larvae reach adulthood within a about a month of hatching.

Plant near: most garden crops
Keep away from: rue
Comments: improves the flavor and growth of garden crops, especially tomatoes and lettuce. Repels mosquitoes

We hope you have enjoyed yet another informative growing article here at Mary's Heirloom Seeds.  If you have additional questions please ask!